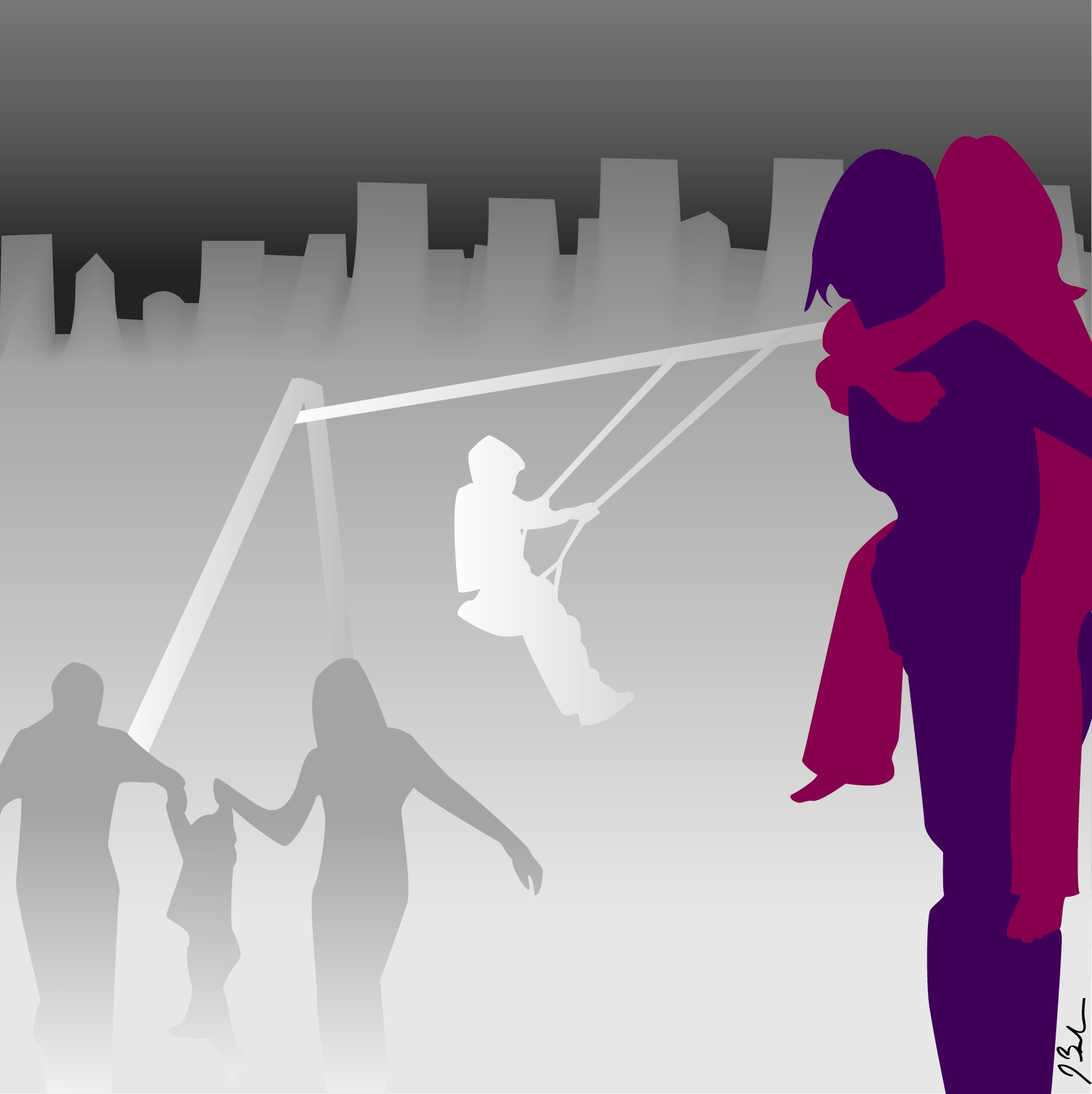 It is 93 degrees in the playground and I am sitting on a bench hiding behind sunglasses and a newspaper as I knock back a Gatorade. My two-year-old daughter is playing in a nearby puddle. I am not really reading, just avoiding making eye contact with the Other Parents.

I seem to be the only parent in this playground with a blinding hangover. But that is not the only reason why I don’t want to talk to them. It turns out that the hardest part about being a parent isn’t dealing with the many miseries of pregnancy, the pain of labor and delivery, sleep deprivation, supermarket tantrums, or even the ever-changing, ever-constant demands of babies and toddlers.

The hardest part is fitting in with the Other Parents. Which is completely beyond my capabilities.

I first realized I was in serious trouble when I was pregnant, the moment I walked into the childbirth class. Everyone else was making their baby a homemade sweater. I didn’t know how to knit. I didn’t care to learn. In fact, craft projects in general are really not my thing. Did this automatically disqualify me? And then, in between learning visualization techniques and how to pant, the Others all had panicked conversations with each other about registering at Buy Buy Baby, getting on waiting lists for nursery schools, and which thousand-dollar Bugaboo stroller they were going to purchase. My only preparation had been to buy a pair of vintage baby sneakers at a thrift store. With the major exception of the single mom and her transgender birthing partner who were in the class, it was like being transported to Levittown during the Eisenhower Administration. One husband even forbade his wife from watching the video about labor. And she obeyed him. I couldn’t imagine spending time with any of these people once the class was finished. Meanwhile, they were all bonding, trading phone numbers and making plans for future get-togethers.

This out-of-place feeling only got worse after my daughter was born. We went to our first children’s birthday party when she was about a month old. My initial excitement about having an actual destination and reason to leave the apartment before three in the afternoon quickly dissipated when we got there. The main activity was a group-sing of “Wheels on the Bus” which was being led, complete with hand motions, by a clown. To my horror, instead of standing around and talking to each other, the parents were all giddily participating! I cowered by the non-alcoholic beverage table, hoping no one would notice if I didn’t join in the inane miming session of windshield wipers, horns, and grumpy MTA workers. Then there were more songs and more hand motions. And diaper changing wasn’t confined to the bathroom. One woman was even wiping her toddler’s dirty butt with one hand and eating a chicken wing with the other. Once the Other Parents realized the mother of a newborn was in their midst, they pounced on me as if they were members of the People’s Temple, full of reincarnation fanaticism. I was overpowered by all the unsolicited, unwanted advice: Don’t use a pacifier because she’ll get buck teeth; Don’t ever give her formula; Don’t carry her in a Baby Bjorn because it’s bad for her joints. And, most importantly, drop your friends who don’t have children, they urged over warm apple juice and carrot nubs. They won’t understand. Just stick with us.

At first I thought I could merely avoid these terrifying people altogether. My daughter was a regular at my local bar by the time she was a year old. Eventually though, she became too mobile for non-child-friendly environments. I had no choice but to bring her to more appropriate places, like playgrounds, and interact with the Other Parents.

My daughter has been content playing in the puddle for about twenty minutes, but now she wants the swings. This means standing in the direct sunlight and watching a moving object, which greatly increases my nausea. The woman next to me is pushing her baby and singing a resounding version of the alphabet song. Why do all the Other Parents enjoy singing in public so much? I had no idea it would be a mandatory requirement. Even during the postpartum yoga class I took right after my daughter was born, the teacher would force us to sing. With hand motions and clapping. Exhausted and emotional, I would resort to pretending that my daughter was fussy, soothing her even though she lay there totally asleep, just so I wouldn’t have to participate. But everyone else happily joined in, even making song requests.

As I push the swing and try not to throw up, it feels like I’m being deep-fried inside a tight fiberglass suit. The playground smells like dirty diapers, rotting garbage, body odor, snot, regurgitated formula. Every nearby child is screaming his head off. Am I the only one in the playground who feels like this is hell? But the Other Parents seem completely content. How is it possible that I’ve lived in New York City for so long and never met anyone like these people: overly cheery adults up early on weekend mornings, wearing clothes that don’t smell like stale beer and cigarettes, who bake homemade everything, including bagels, thoroughly proficient with craft projects.

They are all so full of energy and confidence and organization. I am none of these things. I’m lackluster, late, and always having to make emergency stops at delis because I forgot something at home or lost it on the way. Everyone else is prepared for any possible scenario that should arise. They’ve brought along nutritious snacks in small Tupperware containers, multiple changes of clothes, a diaper-changing station, Travel-size First Aid kit, Purrell Instant Hand Sanitizer, all stored neatly in the clean compartments of their diaper bags. All I have in my backpack are crumpled-up diapers, a half-eaten banana, a dirty dress I fished out of the laundry basket as a change of clothes, and my daughter’s beloved cracked turtle bucket.

The Other Parents have also brought along their superior, snarky attitudes, as well. The playground is as competitive and petty as a seventh grade girls’ bathroom, full of smug comments and judgmental questions, a minefield of possible conversations I’ll do anything to avoid.

My daughter grows tired of the swing and we move on to the mini-slide. A boy keeps knocking her over. “Jonah, use gentle hands,” his father pleads in the slow, over-enunciated baby-talk that is widely acceptable among the Other Parents. “Sorry,” he says to me, using the same awful tone. “He doesn’t realize how strong he is.” My head feels like it’s going to split open and I have an overwhelming urge to lie down, right there on the filthy pavement. Instead I smile weakly at him and wait for my daughter to move onto the next activity.

This turns out to be digging in the sandbox, which is hangover-friendly because I can actually sit down in the shade. Although this does help to reduce the nausea, the low self-esteem and anxiety kicks in. It is a weekday morning and I am in a playground. Everyone else I know is in an un-smelly, air-conditioned office, improving the world or having an important meeting or writing or something, and all I’ve got to show for my day is that I’ve managed to push a stroller five blocks without getting hit by a car or puking. It is hard to feel relevant in the playground, with whatever’s left of a professional life far away. Sometimes I’m not even sure I really exist at all anymore.

As I begin the descent into a full-blown panic attack, I’m interrupted by a particularly odious mom who tries to make small talk with me. She wants to run through the usual topics: our children’s names, ages, and birthplaces. She had a totally natural childbirth, she tells me proudly: “No painkillers.”

I withhold the fact that not only did I have drugs — this amazing legal version of heroin or angel dust or something –but I would have gladly taken second helpings if I hadn’t been so busy pushing a baby out of my vagina.

And then we have nothing more to talk about. “I have some wipes if you want to wash his face,” she says.

I inform her that my daughter is actually a girl.

She looks at me as if I’m somehow mistaken. “Well, you should pierce her ears so people can tell.” Then she gets distracted micro-managing her son’s attempts at climbing on the monkey bars.

I turn my attention towards my daughter and realize that she has somehow managed to create a perfect sand turtle, despite the deficiencies of her cracked bucket. It is a distinct alternative to the standard issue castles, and it’s decorated with bits of strewn trash, which only add to its unconventionality. She sits next to it triumphantly, not caring that it is different from what the other children are making.

She looks up at me expectantly, waiting for my approval. Approval which she needs right now, not at some later point when I’ve finally overcome my insecurities and self-consciousness. The opinions of the better-prepared, better-organized parents don’t matter to her. She has already figured out something that is eluding me: we don’t even know these people I’m so intimidated by. They are, for the most part, and will remain, strangers. What is of utmost urgency is right here in front of me: my daughter. She’s the only reason why I’m here in the first place. The very least I can do for her is to say, “That’s so excellent!” as enthusiastically and often as possible. And enjoy the two of us, alone together, with a whole afternoon stretched out before us.