Somewhere in the early-1970s, my mother decided that her traditional curler set just didn’t cut it. So she began heating her curlers in a pot of boiling water. What made this unremarkable method remarkable was the way she would reach her bare hand into the scalding liquid without a wince. I would watch her standing over the stove as she plucked each curler from the bubbling cauldron – pausing only to shake off any excess water – and quickly secured it in her hair. For a boy who could barely take a warm bath without shrieking in pain, it was a cringe-inducing sight indeed – second only to the time she removed my brother Tim’s loose tooth with an adjustable wrench. Tim could handle pain, too. 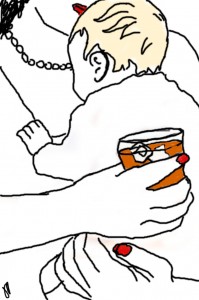 Looking back, I can only guess that my otherwise sweet and demure mother’s ability to withstand or administer Guantanamo-level torture derived from her drug-free delivery of eight children and a Depression-era upbringing in which oven mitts were an unnecessary luxury and backaches were treated with bourbon.

I have little use for pain – as it usually makes me cry like a little girl. Thinking about this fact made me wonder if pain tolerance skips a generation. Or perhaps it just skips children sequentially. Tim, my mother’s sixth child, can open beer bottles with his eye socket. I, her seventh, cannot. Claire, her eighth, married a bruising narcotics cop who likes to put her in playful headlocks while she screams, “Give me your best shot, you pussy!” I complain about ingrown toenails.

My oldest brother, Robert, once hit second-in-line Francis in the temple with a hockey stick. As blood dripped all over the kitchen floor, my mother said to my father, “George, we really should take him to the hospital.” My father responded, “Can I finish my goddamn eggs first?”

Such was life growing up in a house of ten people: boys pushing each other off top bunks, girls hurling shoes with violent intent, and the older kids doling out a deadly daily assortment of wedgies, Indian burns, and pink bellies to us younger ones.

Given the hazing I endured, I’m not entirely sure why I’ll today complain about a paper cut to anyone who will listen, or yell for my wife when I stub a toe, but I’ll venture a guess: it all goes back to my first full day in this world (as told to me by the multiple eye-witnesses to the event).

There I was, nestled comfortably in my mother’s arms as she lay in a hospital bed. We were surrounded by visitors including my father, grandparents, and a few neighbors, when in walked my Uncle Bob and Aunt Susan. A widely acknowledged “fun couple” (a.k.a. alcoholics), they had brought with them a pitcher of Manhattans and began pouring for everyone, including my mother who then handed me off to my Aunt Mim. The impromptu happy hour hit maximum mirth when Uncle Bob shut the door, lit cigars for the men in the room, and introduced my tender ears to a starter set of curse words and ethnic jokes.

As the volume increased and the smoke thickened, Aunt Mim decided to crack a window. She handed me to a neighbor, Mrs. Walsh, who politely guzzled the rest of her second Manhattan to give me her full attention – best characterized as a slurred, vermouth-soaked cooing that asserted my status as the “cutest baby ever.” (I somehow know even now that this was a fleeting and completely undeserved honor). With the window now open, those in the room could hear the sounds of children having a snowball fight three flights down. These were my older brothers, wreaking havoc in the parking lot. After shouting down to them for a minute or two, Aunt Mim turned back to Mrs. Walsh and said, “The boys want to see the baby.” Mrs. Walsh quickly obliged, moving to the window and extending me out into the biting 10-degree air to the roaring approval of my brothers. Thankfully, each of the snowballs missed me by a few feet – but the howling wind and loss of my warm little baby hat were painful enough.

Years later, the funny thing about my relationship with physical pain is that I’ve endured quite a lot of it – making repeat visits to that same hospital. When I was four years old, I was hit by a car. At seven, I went over the handlebars of my bike and split my head open. I once lost three teeth in a home plate collision and broke a bone in my face. In high school, I was on the losing end of one-sided fights with Ed Taylor, Kenny Herzog, and Stephanie Mead. I’ve been punched in the throat, kneed in the balls, and kicked in the ass (of course), yet I’ll still whine for all to hear at the slightest bump, bruise, or misplaced inhaler. Shake my hand too hard and I’ll let out a soft, barely perceptible whimper. Poke me in the chest and I’ll wonder if I’m bleeding internally.

In the end, maybe I just think I deserve it. The right to whine, that is. Not the pain. When I was dangled on high as an infant, I had no words to protest. When I was hit by that car, I was out cold for hours. And when I was beaten up by a girl, I was mortified beyond words – laying motionless in metal shop for the rest of my freshman year.

So if you see me grimacing when I put my coat on, it’s because I think I pulled a muscle. And it hurts a lot.