To my dear children,

I write this note to tell you that everything you heard at today’s press conference is true: I’m leaving the Governor’s office because I really do want to spend more time with you. Each of you. And that’s the only reason.

Tommy:  Mom told me about those across-the-boards D’s you’ve been pulling during my little ordeal, but I completely understand. It’s been a stressful two years for all of us. Heck, when your ol’ Dad is being accused (unjustly, by the way) of something so heinous as diverting billions of stimulus dollars to, well, the places where stimulus dollars go when they get diverted, you can hardly be expected to keep up with your schoolwork. We’ll catch up together when your semester ends. 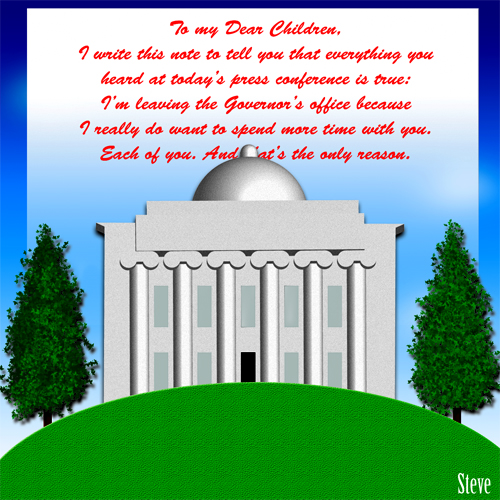 And as for that lady friend of mine that everyone’s talking about, well, don’t let anyone ever tell you that making new friends is wrong. ‘Cause it ain’t. It just ain’t. Now, fallin’ crazy in love with that friend is kinda wrong – especially when you have so much respect for a fine woman like your Mother – but the heart is one of a few very unpredictable body parts, each with considerably more forthrightness than your brain.  But perhaps you’ve already learned that at college. That’s about all I’ve got to say to you right now. Except…Go Gamecocks!

Billy: As for that pretty little girlfriend of yours.  I’m still awful torn up over what happened. For the life of me, I’ll never understand what she was doing naked in my weeknight apartment, binging on whipped cream with that terrible man, or how any sixteen year-old with her whole life ahead of her could put herself in such a dangerous situation. We can only get down our knees and thank God Almighty for blessing me with a security detail talented enough to track down the deaf mute black fella that kidnapped her, stole my apartment keys, and committed such a violent and cowardly act. I cried a river of tears when my aides called me on retreat and broke the news.

But you know what? It’s all gonna be OK. That wonderful girl’s in a better place and there are other fish in the sea, my boy. And the great thing is that I’ll now have time to help you find that special someone (maybe even your soulmate).  Who could possibly be a better wing man than your Dad? Am I right? Let’s race Go-Karts tomorrow, if you’re still into that stuff.

Lila:  I’ll just slide a copy of this letter under your door, seeing as you ate something that didn’t agree with you.  Or did you wolf down another of those pineapple cheesecakes again? What did I tell you about eating so fast and then running off to your room?  Sweetheart, how you stay so damn thin is a mystery to all of us. But I’ll tell you one thing: you’re still as pretty as ever – and you’ll always be my special little girl. Now don’t go and spoil the good times to come by appearing in another of those dirty ol’ sex tapes – no matter how lucrative that market has become…probably because it hasn’t been over-regulated and taxed to death by the Democrat leadership. But I digress.

Now this may come as a surprise, but I like burning incense too. And that Melissa Etheridge music blasting from your room at night isn’t much different from some of the stuff I listened to growing up.  Ever hear of Janey Mitchell? Anyway, I can’t wait to kick back and relax with you and some of those nice girlfriends of yours. Y’all don’t seem to have much left to pierce, so consider my right earlobe a gift. I’m thinking a green feather, or maybe our Lord on the cross. Or better yet…you pick.