“Joy to the world! I fucked. Your. Mom!” This is what Channen, a 10th grader, sings while banging on the keyboard in Victor’s music class. I’m subbing for Victor. In this school they call teachers by their first names, making the insults that much more personal. This is what I’m thinking when Gio, an eleventh grader, taps me on the shoulder and says “Hey, Jew. I’m leaving the room. I’m going to sell some drugs.”

Never should have told them I’m Jewish.

This was in the spring of 2008, the worst term ever in my career of substitute teaching. Most of that year blends together in my mind, but still, I remember too much.

I remember Adrian Gutierrez blasting Albanian music on the computer for no reason. (He didn’t like it either.) And while that music was blasting, Adrian was simultaneously screaming in my ear. “Yeah!” He was screaming. “What, what!”

“You don’t like this,” I said to him, covering my ears.

“This is my shit!” screamed Adrian.

“No. It’s not. You don’t like Albanian music. You’re not even Albanian.”

“You calling me a liar, pussy?”

And so it went.

Call Security–that’s what people on the outside told me to do. But classroom phones rarely work and no security is ever in the hallway. Even if they are around, they are usually joking with the kids and making fun of the substitute teachers—leaving me to wonder, Can you call Security on Security?

“The 40 Year Old Virgin” was the moniker assigned me by the kids that spring. I was 32. I’d had sex, although not recently. Sometimes I wondered if the disrespect I endured was a problem of perception or reality. Did all of the students and teachers in the school see me as a “sub,” in every sense of the word? As in, less than and beneath?  And if they did, who’s to say they were wrong? In the words of Bill Parcells, Hall of Fame football coach: “You are what your record says you are.” And my record says I have been a substitute teacher for 8 years in the New York City Public High School system.

I came to the conclusion years ago that when you’re a sub, not trying is your best option. Attempts to teach caused frenzy. Sitting there doing jackshit generally limited the storm to a few scattered thundershowers. Sometimes I could even talk to a kid quietly, find out what was going on in his or her teenage life, before the other kids ostracized that kid for being civil to a sub. 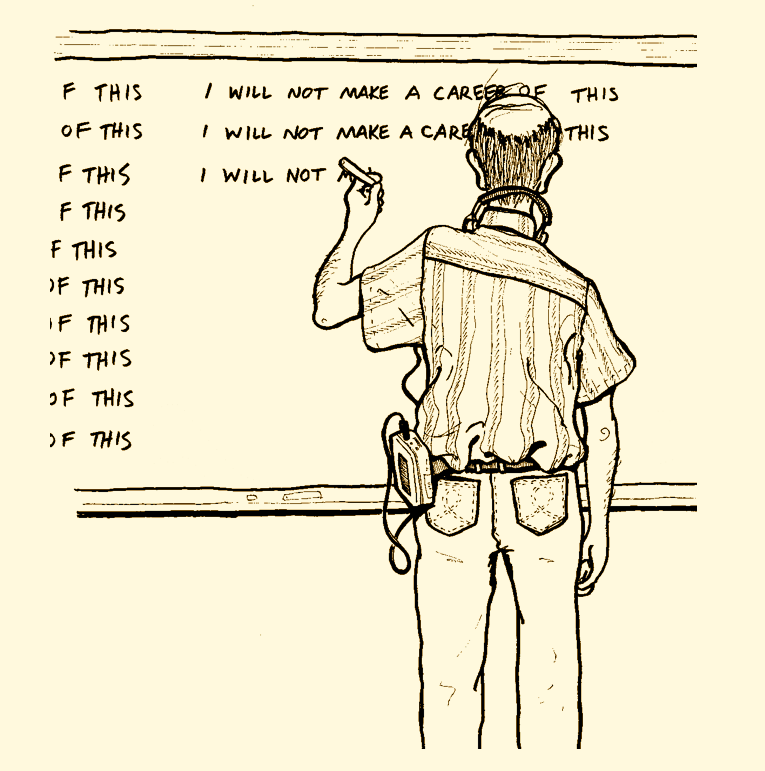 This approach allowed me, during that terrible spring of ’08, to pretend like this all wasn’t really happening. It was what got me through when Adrian grabbed the scissors off my desk, and extended his arm, pulling his sweatpants and underwear away from his body so he could trim his pubic hair. Whether or not that pubic hair ultimately wound up on my bald head was the matter of much discussion among the student body in the subsequent weeks. I couldn’t say for sure, myself, as so much of my time was spent staring down at the floor. But after the Scissors Incident, everyone who stopped me in the hallway asked me the same question:

“Yo, Adrian put his pubes on your head?”

In response, I could only shake my head and say “No,” quietly and unconvincingly.

And what about the school principle, Mr. Andrew? Wasn’t he my recourse? That depends. How does one qualify such classroom goings-on to a school principle—write a note and take it to him?

“Student in question trimmed his pubic hairs in class and may/may not have placed these pubic hairs on my head. Please punish accordingly.”

“Student inquired about the last time I got some pussy, following the query with the observation that I needed to ‘Get my dick wet.””

“Student told me she loved me. Then she rubbed my stomach and asked if I was pregnant.”

“Student asked if I was gay, and when I said ‘No, but anyway, it’s none of your business,’ asked if I ‘Eat the box.’”

“Student faked a punch at my genitals, seeing if I would flinch.”

“Student made loud oinking noises in my ear before running away and leaping onto his desk.”

It was far too much to have to explain. Best to ignore it. Let the kids wear themselves out. Some disruptions have to be stopped—like fistfights. But that’s tough, as you’re not really allowed to touch the students. Have you ever tried to stop a fistfight without touching anyone? You’re limited to urgent suggestions—“Don’t hit him!” “Wait! Don’t hit him again!”

In March, there was the time Devon stepped off the balcony. That was bad. He just stepped over the ledge, seemingly into thin air, and hovered there like Wile E. Coyote. As it turns out, unseen (by all but Devon) was a rickety little platform outside the balcony window. When I reported Devon for stepping off the balcony onto this platform (one of only 4 reports I’d made in all my years of subbing) nothing happened. Devon was back in school the next day, saying, “Hey, remember yesterday when I went over the balcony?”

This incident illustrated the substitute teacher’s conundrum: if you’re unable to control the class (and most classes are uncontrollable), you protect your self-interest by not reporting all of these incidents. A report means you might not be called back again, and therefore might not get paid again. And I couldn’t afford to give up my creature comforts of greasy Malaysian food, iced coffee, and the New York Post. I needed those phone calls, no matter how much that 6 a.m. ring made me cringe. This was the arid plot of land on which I’d pitched my tent—full of skeeters, ants, and ticks. There was nothing else as far as the eye could see. So I just tried to sleep through the bites.

“What’s good, Jacob?” one of my 10th grade students, Luis, was fond of asking me.

That’s what the kids said these days: “What’s good?” The proper response to this question is not “Nothing,” because that’s depressing. Rather, you’re supposed to repeat the phrase back to the asker. In this way both parties are acknowledged, but often no one knows what’s good. Which is the way life goes sometimes.

In this case, however, in answer to “What’s good, Luis?”  Luis responded,

This was a fairly common statement—many of the students spent their free periods smoking marijuana, as evidenced by the parade of bloodshot eyes in the hallway. The oinking, leaping kid did coke. I knew this because when he was oinking and leaping Luis pointed at him, shook his head, and made a sniffing motion, left thumb pressed to his nostril. Luis disapproved of coke. Weed, however, was another matter.

“That’s none of your business, Luis.”

“That means you do. You get the good stuff?”

He was right; that does mean you do, or at least have. “No” would have been the correct answer to that question. But for whatever reason, I didn’t like lying to these kids. I shook my head, but accidentally smiled a little. I liked Luis, despite myself.

“Yo, Jacob, I’m so high. What you think about that? You won’t say nothing, right? Right. You mad cool, ‘cause you don’t do shit. Serious. Don’t laugh, everybody. Chill. I’m serious. That’s like, his thing. He don’t do shit. Ever. You can’t make him do shit. He just sits there, and then sometimes, he goes, like, ‘It’s too loud’, but that’s just for show, so, like, he can pretend he’s doing something, in case somebody is watching. I like it. You’re my favorite substitute.”

“Work with you? Sure. On what, Luis? Are you doing anything?”

“See, that’s why I like you. I want to adopt you. And then abandon you.”

I didn’t know what that meant, but it made me chuckle.

“Write? You gonna write about this?”

“No, it’s not out for a few months. Besides, it’s inappropriate.” (Ugh, I thought, as soon as the words were out of my mouth. Again, why didn’t I just say “No”?)

Yeah, I thought. That’s what it’s about. Pussy. The Great American Pussy Book.

“No, Luis. It’s just too adult for someone your age.”

He had me there.

“None of your business, Luis.”

“Okay. You sure? You sure you sure? Alright. You leave here. You put on your old, crappy Walkman. You don’t have an iPod. And your batteries are running out. You get on the train and ride it home. And you put on your tape of ‘Forever Young.’ You know, ‘Forever Young/I want to be forever young/do you really want to live forever? Forever young...’”