Every now and then I go get a pedicure.  Like once a month or less.  I didn’t get my first one till I was in my mid to late twenties.  I’m not sure why I didn’t get one–I guess it was some residual tomboy bias against doing anything so indulgently impractical. Although it was probably a more aggressive, shoulder-chip based anger, like, “Why are people gettin’ pedicures?  What do they think they are, like, queens or somethin’?”

But then one summer everyone was rocking flip flops and suddenly every self respecting girl over age eight had a perfect little pedi—little pink toes lined up clean and neat like freshly dyed Easter eggs.  I started dating a guy who had a vague foot fetish and I decided I had to fall in line.

Things I like about pedicures: the leg and foot massage.  Crap, is that great.  Also, I admit it looks nicer than having yellowy uneven nails sticking out of your shoe like little antlers.

Things I don’t like about pedicures:  the sensation that no matter how much I pay the chick tending to my feet, it still feels vaguely like having a slave.  Like I’m sitting in my throne while someone kneels below me, performing the most unpleasant of tasks, rubbing and clipping as I enjoy such luxuries as a chair massage or reading about Britney’s vagina in InTouch Magazine.

I know they are making a living, and I know its probably useless liberal class guilt, but I still feel like I’m tryin’ to be some sort of Queen Elizabeth or somethin’.

Oh, the other thing that bothers me is the filing.  That hurts a little.

Then there’s the whole business of choosing a color.  This makes me feel like the biggest tool.  I want to care as little as possible about this whole process, because when I see women being big old jerkos about their nails I wanna strangle them, and I see it all the time.

Once I was getting my nails done because I was going to a wedding, and the chick next to me started yelling at the middle aged woman doing her nails: “I need you to wash this off and do the whole thing over!”

I missed how the pedicure lady responded, but the chick yelled back, “I KNOW MY NAILS ARE RIDGED BUT YOU NEED TO DO THEM AGAIN!!!”

Hi, nice to meet you. Go fuck yourself and your ridges, fucko.

But I can’t help but get hung up on the color.  There are way too many choices.  And it’s not so much the colors themselves as the NAMES of the colors.  If it weren’t for the names it would be easy, because most of the colors are about 1/900th of a shade lighter or darker than the one next to it and you’d have to be some kind of gay Rainman to tell the difference.

But the names of the colors make it more about deciding what kind of person you are.  There’s an off-white I’m always drawn to until I flip the bottle over and then I see its called “Limo-o-scene.”  I’d rather put a gun in my mouth then know I’m wearing something called Limo-o-scene on my bodyparts. 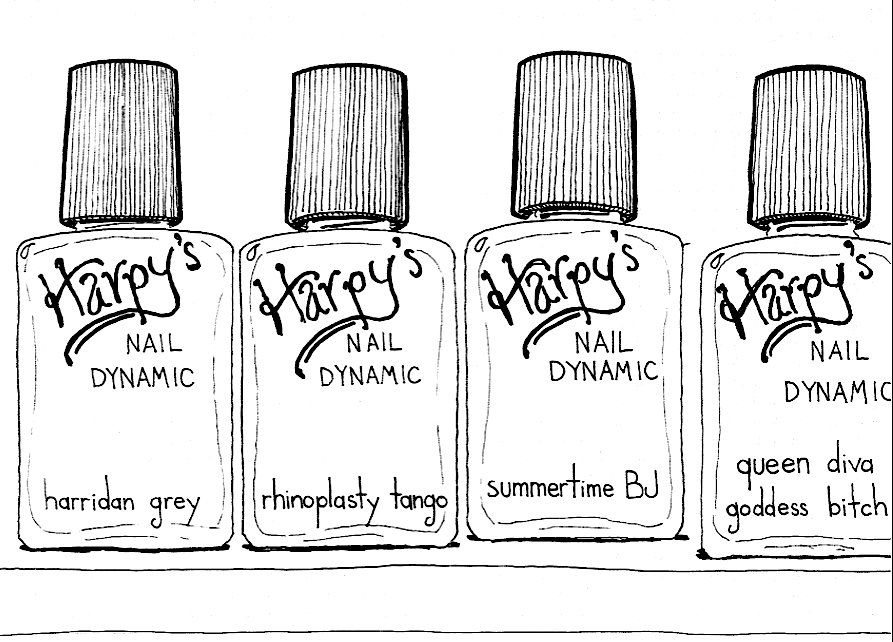 There’s another one called “Meet Me On The Jitney,” and again, bullet to head.

“Ballet Slippers” would maybe be OK, but then I think of everyone I ever knew who took ballet and they were all anorexic snobs.

There’s “Sold Out Show” which is a shade I think is pretty, but then I think about me as a performer putting on “Sold Out Show.” Like that would seem like good luck for having a “sold out show.” And even though that’s not why I would put it on, just the thought that somewhere in the world there might be one person who performs who might do that makes me want to weep into my pillow.

Then there’s “Mucho Dinero.” I mean, you might as well just get into the bathtub with your toaster.

I’ve started to think that I need to whiten my teeth.  But it’s not that simple, because I have a couple of issues with it.  I guess I put teeth whitening sort of in the same category as the pedicures, insofar as I feel like ten years ago everyone walked around with their teeth the color of a coyote’s and no one gave a shit.

And then, gradually, no one was allowed on TV unless they looked like they just got their teeth, like, TODAY.  And regular people follow suit and now there’s a fucking “Brite Smile” on every corner.

The thing is, I hate the way it looks when people have insanely whitened teeth.  I see an actor like Tom Hanks on Oprah and he’s like 55 years old and his teeth are glowing like that gem console from Land of the Lost.  So are Oprah’s.  It doesn’t match the rest of their body.  I don’t think you need to match your shoes to your bag, but I do think matching your head to your body is a pretty solid fashion “do.”

That said, I’m tempted.  I had braces for five years.  Full braces.  Top.  Bottom.  Rubber bands. (I don’t think they even make those anymore.)  Headgear.  It was an epic struggle to get my snagglies in shape, but Dr Klapper (God bless him) won out.  So I feel like I should try to honor that work by keeping them tippity-top shape, because they’re pretty straight.

But I have some teeth on the sides that are starting to turn a smidge yellowy.  Not a great look.  I mean they’re not corn muffin yellow. But maybe, oh I dunno, the color a rich person would paint his kitchen.  Like a “Light Butter.”

I don’t know where to go or how to do the whitening.  I tried WhiteStrips, which seemed really easy, but they are not.  They’re disgusting and they don’t stay in place.

Plus, you can’t eat while you have them on, and you’re supposed to have them on for half an hour. That’s about fifteen minutes longer than my non-eating window.

I also don’t trust “Brite Smile.”  Isn’t whitening something that should be done in an actual medical facility?  Going in there feels like dropping into a Quiznos to have your appendix out.

And there’s something creepy about those places in general.  A weird vibe.  Sort of Scientologyesque.  Like I’ll get my teeth whitened but while I have the whitening thing in my mouth they’ll make me listen to some lectures about “Technology for Living.”

I don’t need that. I just need to get rid of this Butteryness.