I’ll watch anything with a Real Housewife in it.

I say this with no pride and little understanding. I have no preferences. I will watch any housewife, anywhere. New York. New Jersey. L.A. O.C. Atlanta. (And D.C., and Miami, and Bethenny’s Getting Married, and Don’t Be Tardy for the Wedding AND Bethenny Ever After. Do not fuck with me son. I am for real.) My wife and I don’t really channel surf any more. We put our dinner on the coffee table in front of us and turn on the TV. It’s on Bravo, exactly where we left it the night before.

Until recently I had no idea why I did any of this. Housewives don’t make me laugh like Parks and Recreation. They don’t soothe me like a nice, sprawling football game. The wives (about half of whom are still married about this point, totally betraying the series’ premise. Why isn’t anyone talking about this?) are marginally self-aware puppets with a zombie thirst for white wine. So there aren’t even any characters to get attached to.

I probably hate them. Whenever I see Tamra Barney’s face floating on my 32” Visio, I look deep into its screen and I know exactly what my mom meant when she said she wasn’t mad at me, just disappointed. 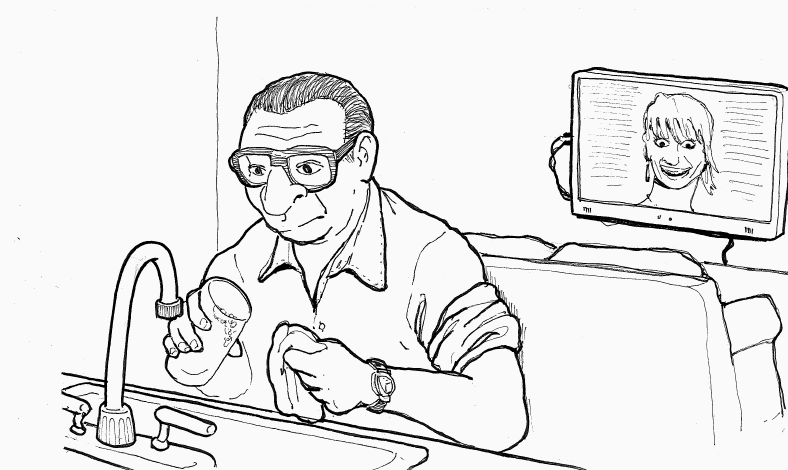 Then at thirty minutes, the tension starts to build. Whichever housewives are at each other’s throats this week arrive for an ill-advised lunch.  And then, just as the real twattery gets started – just as they start blinking their giant eyes at one another, as they start preening and denying ever having said things they are currently saying, and as they start standing up, and flipping tables and hurling razor sharp non-sequiturs at one another – just then, I’m overtaken by an anxiety that makes it impossible for me to watch for one second longer.

And then I get up and do the dishes. My wife usually tells me how it ends.

Twenty-three hours later, I’m right back in front of the TV like nothing happened.

I’ve never been a slasher fan. As you can imagine, since I can barely watch Caroline Manzo shoot dirty looks, watching a man in a Halloween mask shoot a harpoon through three co-eds at simultaneously is a little much.

Here’s what I can get though: A slasher fan watches a slasher movie, and as the psycho murderer pushes the violence ever farther, inch by inch, devising new, horrendous, totally unforeseen ways of mutilating the human body, the fan feels that demented thrill rise in his chest.

With every chainsaw and every meat hook the fan moves a little closer to the edge of his seat, every breath getting shallower, every thought asking: How much farther is the psycho going to take this? What new ways of causing physical pain, and destroying the body are possibly left? It just builds and builds until you throw your hands in front of your eyes. Ohmygod a cleaver up the ass! Oh, oh, oh, no. Ahhhhh: Catharsis.

The other night, as I watched Ramona bobble around wearing twice as much makeup as any other human being has ever worn before, I realized the sickly magnetic thrill I’m getting must be coming — like the insane killer who’s calling the babysitter from inside the house — from a terrifyingly familiar place.

A Real Housewives fan is getting the same agonizing fisson as the slasher fan, because the housewives are doing the same thing as slashers. Only instead of mutilating bodies, they’re are hacking through social situations and gutting everything your mother ever taught you about how to behave around other people.

How much more uncomfortable is Joe Guidice going to make everyone with his racist jokes? How can Sonja Morgan possibly find more dignity to throw away? Ohmygod she’s so proud of the degrading toaster oven cook book she’s “written” that she’s doing a sexy photo shoot for it. Without panties. Oh, oh, oh, no.

It’s been said we can’t look away from the constituents of Andy Cohen’s traveling circus because they’re train wrecks. But a train wreck is an accident. A train wreck only happens once, and after the train wrecks, it doesn’t right itself, back up, think of a new, more humiliating and un-self aware way to wreck and then go lunging off the bridge again and again, plugging the awful dance single it recorded in its basement studio as it plummets all the way down to the bottom of Wile Coyote Canyon.