Michelle the producer, who sits at the desk next to me (actually it’s just one long, low shelf built into the office wall–so really, we’re sitting at the same desk) took a red-eye from L.A. last week. She’d sat next to a weeping toddler the whole way. As a result, she’d done some weeping herself.

Michelle, the victim, was miserable. The infant perp had obviously been miserable. And the kid’s mom–some sort of accessory to the whole thing–was two layers of miserable: Dealing with a raging tot is one thing (she does that all day), but being responsible for a little wailer as she’s sitting in a little public tube in the sky, having daggers stared into her…The poor woman must have been embarrassed over 12 states.

Thus was born The Stork.

That’s just a working title – something like “The Happy Pigeon to Disney World” probably flows better, but all that comes after the point, which is this: Why not have a commercial flight specifically for families traveling with young kids? 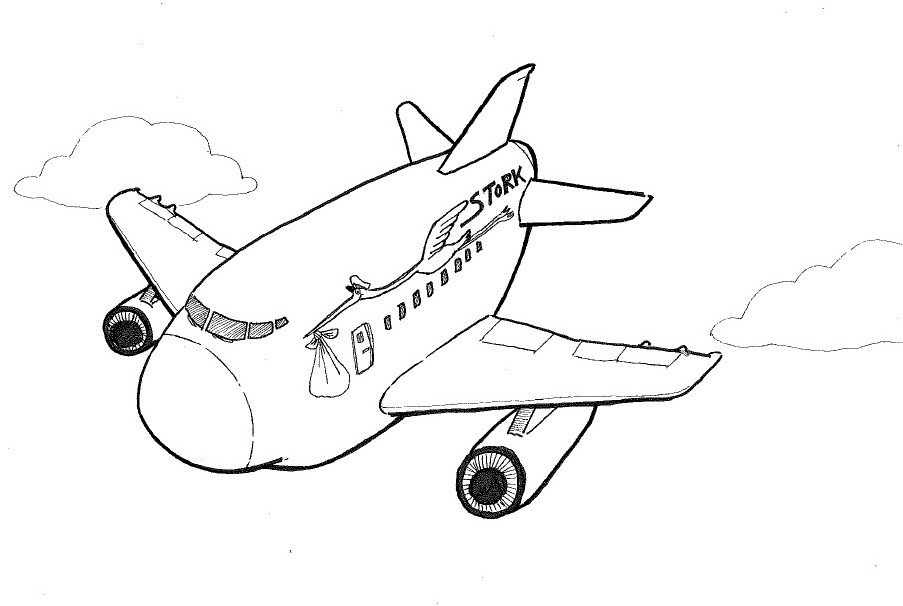 When the plane arrives at the gate, 100 little grape-juice stained noses are pushed up against the wall-glass because they’ve never seen anything like this: The whole fuselage is painted like giant stork with a soothing, developmentally-delayed grin on its beak.

A gate attendant in a Cinderella costume boards the kids like the Pied Piper. The in-flight movie is Cars II. The flight attendants can make balloon animals. Instead of pretzels you get Happy Meals. And instead of first-class, you have infant class – a quiet, curtained-off corner where you can gently rock the especially disturbable little ones.

And if your kid won’t stop screaming, so what? You’re surrounded by other parents. No one’s glaring at you. Their ears probably can’t even hear the crying kid wavelength anymore.

This plane would always be packed – especially if you’ve got it going to and from a big family destination, like Florida. You could charge an extra $20 or $30 per seat for the experience.

It also creates a nice customer-service halo around your whole company, though you’ve only tweaked the operations of one or two planes. Even if you don’t travel with child, you’re going to remember which airline is thinking of ways to make people’s flights easier.

And the earned media: Good lord, the coverage you’ll get for this on a slow news day.

So, other than the fact that The Stork’s flight attendants would probably have an above-average suicide rate, what holes can you poke in this idea? None. Because this idea is a double-stuff Oreo, and the extra stuff is money.